What are the Characteristics of Quarter-Turn Isolation Butterfly Valves?

Continuing with the previous posts regarding Quarter-Turn Isolation Valves with a post about the characteristics of Butterfly Valves.  Like the Plug and Ball, the Butterfly Valve  saves weight and is faster to open and close, but it also saves space. * This article will focus on Resilient Seated design. There are also Double Offset and Triple Offset Butterfly Valves, which will be explored in a forthcoming post.

Butterfly Valves are designed so that the fluid is controlled by a disc, rather than a plug or ball, which helps save space.  It can have a resilient seating design. This design incorporates a disc that is held in the center of the valve and rotates to control product flow. The disc is always in the media stream with minimal flow restriction. Resilient seated butterfly valves are not ANSI‐rated but fit between ANSI Class 125 & Class 150 flanges.

Most butterfly valves use the same basic stem configuration as a trunnion‐mounted ball valve with a stem on the top and bottom. However, in this case the stem is mainly incorporated to balance the disc. Many different types of seat materials are available, including Buna (NBR), EPDM, Viton (FKM), PTFE, natural rubber or neoprene. 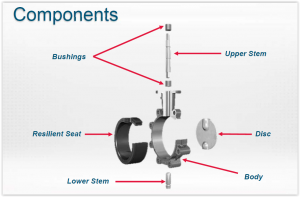 The seat shown above is a cartridge type seat; it has a phenolic backing ring with the elastomeric seating material molded to it. Other types of seats are booted and molded.
Both the cartridge and booted type seats can be replaced along with other critical parts.
Elastomers are excellent for a broad range of services, except steam.

There are a variety of butterfly valve styles based on how they are mounted in a piping system. The wafer style fits between two flanges and bolts surround the valve. The lug style has protruding lugs with tapped bolt holes mating it to standard flanges. The lug style butterfly valve is commonly used in dead‐end service. Both wafer and lug style valves do not need gaskets when mounting them in the piping. Then there is the flanged style. It has two end flanges and is bolted up just like any other flanged end valve. Another type is the grooved end butterfly valve. The grooved end design has a longer face to face, like the flanged, but is much faster to install.

The basic elastomer‐seated butterfly incorporates an interference fit where the disc diameter is slightly larger than the seat, which provides a bubble‐tight seal. The shut‐off capability is solely a function of this interference and greatly affects the torque. The primary stem seal is also an interference fit. With the improvement in elastomer technology and the introduction of many new elastomers, the performance of butterfly valves has improved. These butterfly valves are well suited for on/off and throttling applications. They are available in 2‐inch through 72‐inch sizes. 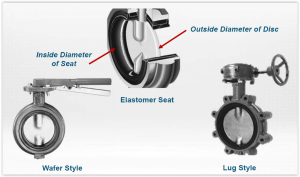 There are many materials that can be used for the body, stems, disc and seats. Some options for the body include various irons, bronze and steels. Stems are often made from 316 or 416 SS, and Monel. Discs use aluminum bronze, ductile iron or alloy 20, to name a few. We previously mentioned the most common elastomers. Take care when selecting the seat material. The user should be familiar with temperature limitations and compatibility of the elastomers for the intended service.

Butterfly Valves can be utilized in a variety of applications. The HVAC industry is one of the biggest users of butterfly valves. Other industries include chemical, petrochemical, refining, irrigation, and oil and gas drilling. Butterfly valves are also commonly found in food and beverage applications, water and wastewater, power generation, mining and dry bulk handling.

Setpoint Integrated Solutions offers a variety of butterfly valves that will suit any application. We are proud to partner with Flowserve Durco and Triac brands. Contact us today to find out what configuration works best for you.

What Are the Characteristics of Ball Valves?

What are the characteristics of Ball Valves? *

Ball Valves, like the previous post on Plug Valves, are a type of quarter turn isolation valve.

The most common design that is utilized features a ball that rotates between two circular seats which are usually made of some type of PTFE , co-polymer, or other resilient plastic material.  When this type of ball valve is in the open position, media flows through the opening in the ball, and when closed the flow is completely blocked. Ball valves are often used for On/Off service (isolation) and are suitable for Bi-Directional Flow. 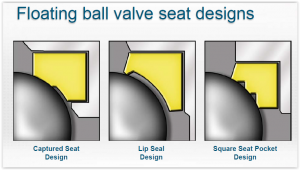 The Trunnion-Mounted Ball Valve is made up of the following basic components. Body, Ball, Seat/Seat Assemblies, Upper Stem, Trunnion and End Connections. These valves are often supplied with flanged or butt-weld ends. 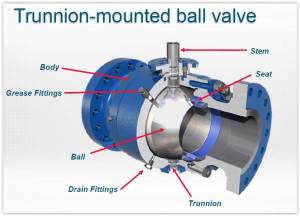 The advantages of Trunnion-Mount Ball Valves are:

The Trunnion seat design is manufactured in one operation that machines the metal seat holder / retainer to which the seat insert is added. In some configurations the seat insert is then locked into place by rolling the seat lip into the insert groove, resulting in an extremely reliable seal. 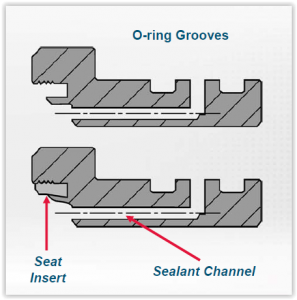 Ball Valves are used in a variety of applications including, but not limited to:

Setpoint Integrated Solutions has a variety of both floating and trunnion-mounted ball valves available from top tier OEM partners. Contact us today.

Since its inception in 1982, the Greater Baton Rouge Business Report has been committed to delivering accurate, honest and in-depth coverage of the Baton Rouge business scene. After many years and hundreds of issues, this publication not only continues its mission, but also has exceeded expectations by becoming a true partner to business and the community.

Celebrating its 35th Anniversary this year and featuring a Setpoint Integrated Solutions full page ad in the commemorative anniversary issue below, the Baton Rouge Business Report hosts many events in the community. At the most recent event, the Top 100 Private Companies in Baton Rouge were all honored at a luncheon at the  Baton Rouge Crowne Plaza.

Setpoint I.S. was the 28th largest private company in Baton Rouge by 2016 revenue.

What Are the Characteristics of Quarter-Turn Isolation Plug Valves?

There are many choices of Quarter-Turn Isolation Valves within the industry, such as Plug Valves, Ball Valves, and Butterfly Valves.  This post will  focus on Plug Valves and their characteristics.*

• In the quarter-turn family, opens and closes with 90-degree rotary turn
• Used for on-off and regulating flow
• Lubricated and non-lubricated types
• Available in many different materials

Plug valves have been in use for quite some time, they are  the oldest design of the quarter-turn isolation valves. They contain three basic components, of a body, a plug, and a cover.  The plug can be round, rectangular, tapered, or cylindrical, features a passage through which the media can flow, and this media flow will be controlled by turning the plug 90°, hence the term Quarter-Turn.

The on-off rotary turns will allow for isolation  and for regulating flow.

While plug valves are useful in many applications, they are particularly easily adapted to multi-port construction. As a result, three and four way plug valves are commonly used in the chemical processing industry. An advantage of this is the elimination of fittings or multiple straightway valves with one multi-port valve.

Plug Valves can be classified into two types: 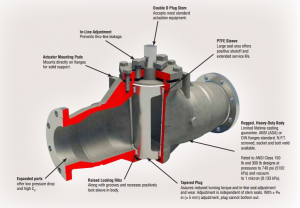 Lubricated Plug Valves allow lubrication to be injected in a fitting under pressure through grooves in the plug or body to prevent fluid leakage between the plug face, and the valve body.  The reduced friction from the lubricant also enhances easy and quick operation of the valve.  The lubricated plug valve seals only against the downstream seat, and when properly lubricated is often the most leak-free seal available. Temperature limits will be based on the lubricant used within the valve, and the pressure drop should be fairly low due to the flow path being streamlined.

Lift type non-lubricated valves are designed so that the stem first lifts the plug off the seating surface and then rotates the plug into the open position. This is useful in extending the life of the plug as it is not being drawn against the seating surface during stroking. After rotating the plug to the closed position the handwheel will continue to need to be rotated until the plug is properly in position against the seat. The mechanical seal on both the upstream and downstream sides of the valve in the closed position allows this type of plug valve to be used as a double block and bleed.  This feature allows the center section to bleed or clear any debris within the valve if it is has been equipped with a bottom access plate.

Sleeve lined plug valves are similar to a conventional plug valve, but it uses a fluorocarbon sleeve locked in place surrounding the tapered plug maintaining a  continuous seal. THe sleeve supplies the lubricity needed to cycle the valve, giving it characteristics of quick open and close, maintenance free performance, non-stick, and an extended life.

A lined plug valve is the same as a sleeved plug except that the body and plug are completely plastic or teflon lined and this isolates the valve body from the media. Usually made with a body of Ductile Iron, which is sufficient due to low temperature and pressure used in chemical applications.  Having the valve body isolated offers a less expensive alternative to special alloys. The limits on a plastic lined or sleeved plug valve is that it has a limited operating temperature, usually no more than 400 degrees F.  These valves tend to be found in highly corrosive applications, pharmaceutical, and food / beverage applications.

Finally, the eccentric type of non-lubricated plug valves is similar to a conventional plug, with half of the plug being removed. As the plug  rotates it is moved away from the seat, so that the plug is completely out of the media flow path when fully open.

Setpoint Integrated Solutions has a variety of Plug Valves to choose from, as we are distribution partners of top tier OEM Flowserve Durco. 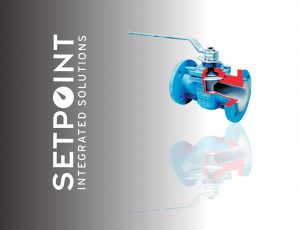 *This information was adapted from content created by the Valve Manufacturers Association for Valve Basics, details found here.

Any cookies that may not be particularly necessary for the website to function and is used specifically to collect user personal data via analytics, ads, other embedded contents are termed as non-necessary cookies. It is mandatory to procure user consent prior to running these cookies on your website.