Jonathan Pledger, Vice President of the Eastern Region : “ The Greater Lafayette community has experienced very challenging times with the downturn in the oilfield market.  Setpoint IS’s leadership wanted to tangibly demonstrate to our customers, our employees, our suppliers, and the community that we are here for the long term to meet the requirements of the upstream market.  We saw no better way to do this than to invest in a new facility.”

OEM partners Schneider Electric, Turck, Scott Safety, and Ashcroft all exhibited at the celebration that followed, highlighting the Lafayette Branch’s commitment to distributing top tier products to its customers.

“We appreciate the support from our customers and vendors.  We are happy to be a part the Oil & Gas Industry, despite the ups and downs of the market.  We look forward to seeing an increase in business this coming year and can’t wait to cater to our customer’s needs for many years to come.” Mindy Delino, Lafayette branch manager.

Setpoint Integrated Solutions (Setpoint IS) is a leading integrated solutions and services provider in the process control industry. Setpoint IS engineers, sells and services products ranging from control valves and process automation equipment to relief valves and industrial filtration, and provides a full range of site services and immediate technical support. Setpoint IS, headquartered in Baton Rouge, La., is a subsidiary of Pon Holdings B.V. of the Netherlands. For more information on Setpoint IS’ products, services and locations, please visit www.setpointis.com. 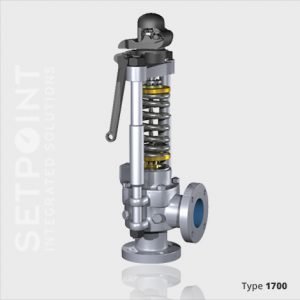 Is your Section 1 Boiler Safety Valve Body Wall Eroding? With many of these valves being original installation, making it is possible that  75% of all current Boiler valves were installed in the 1960’s*,  the answer is probably yes.

Body wall deterioration can occur over time in any process, and is an often overlooked factor in the review and repair of a safety valve population. Other issues related to the body wall thickness factor are that the availability of old design parts is declining, and the nozzle height of older models is different than what is available today.

The National Board Inspection Code does not address the wall thickness of Safety Valves as a component of the VR Program. This could lead to failure if the wall thickness is not sufficient for the pressure / reaction force that is acting on it. If this feature is never checked in accordance with a standard, it could prove to be the feature that causes a failure.

Additionally, inspecting the body wall thickness of your safety valve population helps to minimize the risk associated  with the current long lead time for new Safety Valves. Anticipating outages before they can occur helps to position end users to be their most competitive.

So how do you know when the  wall thickness has become to thin?

ASME B16.34, Table 3B showcases the ASME Valve Body Minimum Wall Thickness* calculations per diameter and pressure class.  Utilizing this table will help better inform the end user of the state of their valve body wall, leading to prevention of a failure. 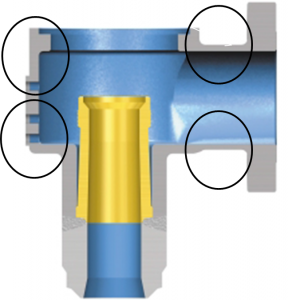 The circles identify areas in which body wall inspection may not be a requirement of the Valve’s repair process. The areas are the ones that Setpoint IS recommends reviewing to check if they adhere to ASME B16.34-2013 Table 3B.

As the experts in the service, maintenance, and repair of Safety Valves, Setpoint Integrated Solutions stands by as a trusted partner to inspect your safety valve population. We look forward to helping you identify issues before they occur while improving safety and mitigating costly downtime.

*Citation of ASME 6.1.1 of B16.34-2013 regarding Wall Thickness, which states: “For inspection purposes the wall thickness of valve bodies at the time of manufacture, except as indicated in paras. 6.1.3 through 6.1.7, 6.2, and 6.7, shall be no less than the minimum values “tm” either as shown in table 3A or table 3B or calculated using the equation shown in Mandatory Appendix VI (which yield essentially the same result). Linear interpolation may be used for wall thickness values intermediate to those listed or calculated. See Nonmandatory appendix B, section B-5 for an explanation of the interpolation procedure. The minimum thickness requirement for the body wall is applicable only as measured from internal walled surfaces. Minimum wall thickness shall not include liners, linings, or cartridges.

Any cookies that may not be particularly necessary for the website to function and is used specifically to collect user personal data via analytics, ads, other embedded contents are termed as non-necessary cookies. It is mandatory to procure user consent prior to running these cookies on your website.